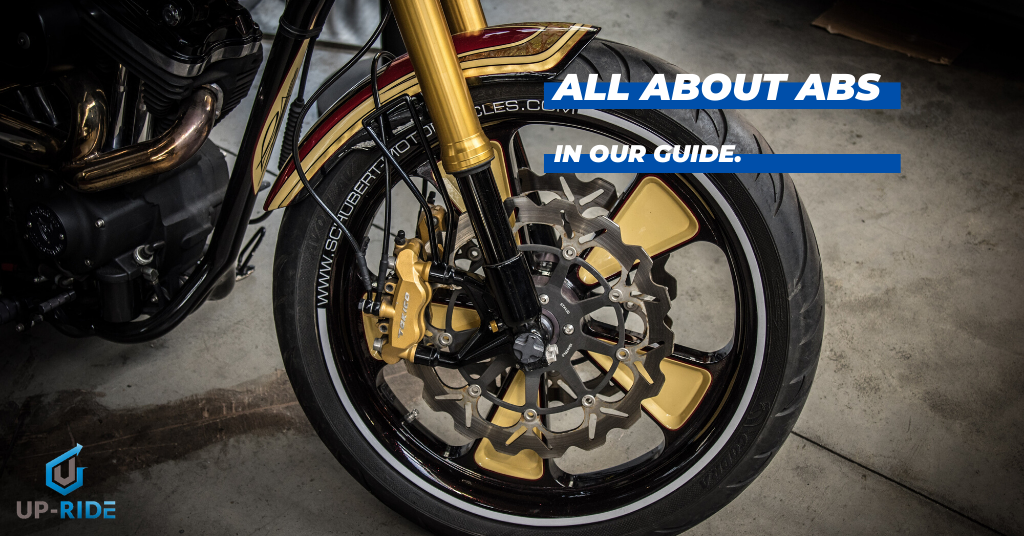 Who doesn't know these 3 letters - ABS.

A system that has long been part of the basic equipment in the car sector has also been on board in the motorcycle sector for a few years, the reason for this is the legislation increasingly becoming more stringent. Although this very regulation was introduced in 2016 within Europe for all newly registered motorcycles, the German manufacturer BMW already offered such a ABS system almost 30 years earlier, namely in 1988 for the K-100 models. One of the main reasons why it took such a long time in comparison to passenger cars, is more technical such as its weight and a higher complexity, as well as financial reasons in the form of costs. Quite plain and simple. Is it really?

The mankind has and will always try to push the boundaries. A fallacy among many riders if they are of the opinion that a braking maneuver is suddenly subject to different laws of physics: Indeed, anti-lock braking systems help, but they do not relieve you of the responsibility to brake properly. One thing you always have to be aware of: a full braking manouvre on a motorcycle is always a compromise between the shortest possible braking distance and a non-blocking front wheel.

But... How do I brake properly?

The braking process – with or without ABS – is basically the same, namely below the control range. If you brake properly, you can take full advantage of the strengths of the system. In order to brake properly, every driver should master the following points.

How does ABS actually work?

Only when the blocking limit that was already mentioned is exceeded, a braking maneuver with ABS differs from a braking maneuver without ABS. No matter whether in an emergency situation or when accidentally braking over a slippery area – the vehicle stability, which the driver himself has to restore without ABS by releasing the brake and reapplying, is guaranteed by ABS technology. All well and good – but how does ABS actually work in a motorcycle?

During a braking maneuver, the system acts particularly on non-adhesive road surfaces by counteracting the blocking of the wheels by reducing the brake pressure until the wheels can turn again, after which the pressure is built up again. But where’s the difference to a car then?

The main difference is not necessarily to be found in the technology, but rather in the purpose: The decisive criterion for a car is clearly the reduction of the braking distance, whereas the motorcycle is more about reducing the risk of falling, especially if the front wheel tends to lock during the braking manouvre.

If you have already taken a closer look at the brake system on the fork of your (ABS) bike, you may have wondered why the manufacturer implements kind of fan-shaped recesses or holes near the brake disc. You guessed it – there is a reason for this: The wheel speed is measured using an induction sensor on each wheel and in the event of an impending wheel blockage (the wheel comes to a brief standstill), a steep drop in the circumferential speed of the wheel is detected. The brake pressure is then reduced until the wheel rolls again. After the wheel starts to roll again, the brake pressure increases until it locks again – a process (also known as the control frequency) that can be repeated up to 15 times per second. The extensive signal processing that is necessary is performed in a central control unit with up to 3000 pulses per second. When the ignition is activated, a kind of self-test is carried out after exceeding the minimum speed, whereby detected faults – similar to those in a car – are stored in an electronic fault memory.

How can I check if ABS is active when braking?

In the control range of the ABS you can feel the activity of the ABS as pulsations in the hand or foot brake lever. In addition to the wheel speeds, modern systems also take inclination angles and rotational accelerations into account, so that the response of the systems when braking in curves has massively improved – a huge weak point of early generations. With modern systems, a pulsation in the lever can often no longer be recognized.

In the event of full braking, you are forced to operate the clutch at the same time as the brake is applied. Sure thing. During the actual braking phase with high decelerations, tire reactions (such as tread noises or scratching noises on gravel) can provide valuable information about the grip limit. Because: Full braking on a motorcycle is always a tightrope walk, so it is important to reduce the braking pressure even at the slightest sign of a locking wheel.

Which variants and generations are available?

As with many other technical solutions on and around the motorcycle, ABS has been continuously developed over the years. The systems available today, slightly differ from manufacturer to manufacturer.

The control frequencies, that was already mentioned in the beginning, and the control quality are far apart depending on the system development. The early generations, which were often referred to as ABS-I, had a maximum of seven control processes per second, whereas the latest and newest systems available are characterized by having up to 15 control processes per second. Believe it or not, the first systems were already available in 1988 and had a total system weight of approx. 11k (!) Current 6th generation systems (from approx. 2013 onwards) are equipped with an inclined position sensor featuring three acceleration and three yaw rate sensors and can measure the declination and the pitch angle of the bike up to 100 times per second. Pretty impressive. By the way, they have significantly slimmed down to a total system weight of about 1kg – not unimportant for a motorcycle. In technical jargon, this type of ABS is often reffered to as cornering or curve ABS. Nevertheless: Bosch, a well-known manufacturer who is significantly involved in the development of ABS systems, does not  explicitly speak of curve or cornering ABS, even with the latest generation (Bosch MSC).

But where’s the limit for ABS?

Well, motorcycle ABS is designed to maintain the driving stability when braking on a straight road – by implication, cornering is more problematic – especially for older systems. However, the physical and systemic difficulty of the braking torque that is applied when during this braking event when cornering, remains an existing challenge even for newer systems.

Furthermore, a high slip control of up to 30% (of 2nd generations of ABS) can, in extreme cases, lead to a rollover (so-called stopies) in the event of a very grippy road just before standstill. The brake pressure (on the front wheel) may open briefly on uneven, extremely undulating roads, which, when the suspension is rebounded, results in a steep drop in the circumferential speed of the wheel, even though the tire has not yet reached the grip limit. In order to avoid panic attacks, it is essential to take a sufficient braking distance into account here.

How should I behave if there’s no ABS and a blocked tire occurs?

Since each turning wheel must be equipped with a braking system, both the rear wheel and the front wheel can lock up when braking – in the worst case, both. If the rear wheel locks when braking, the rear of your bike can break out, which usually has no worse consequences. In this situation, the motorcycle should return to a stable position when the brake is released immediately. With a blocked front wheel, an inexperienced motorcyclist can fall very quickly and be seriously injured. Even experienced motorcyclists often do not know how to deal with a blocked front wheel.

In any case, the following applies: If the front wheel locks, the brake should be released immediately.

What are the advantages and disadvantages of ABS?

The EU regulation (168/2013 / EU) on the type approval of motorcycles enacted on January 1st in 2016, stipulated that all newly registered motorcycles with an engine displacement bigger or equal to 125 ccm (as well as with a power rating above 11kW) need to be equipped with have such a system. Only exceptions apply to the class  of certain competition and trial motorcycles which – often due to their design – are rarely used on public roads. During the initial registration of a bike that is factory new, this regulation became active 1 year later, namely on January 1, 2017. So if you want to buy a motorcycle of the mentioned performance or displacement class, you don’t even need to ask yourself the question: ABS? Yes, No, Maybe? …Definitely!

Braking with ABS in no way requires less practice than without, but it brings a significant increase in safety and an even higher driving and operating comfort. The best way to get to know the forces that occur and the special features of your own motorcycle is through safety training. One thing’s for sure: Today’s systems are already that technically advanced, that even the most experienced drivers cannot keep up with them and achieve better braking values.

How can I check if the system is working properly?

Like many other technical systems, also ABS consists of several components. Understandably, all components must be fully functional in order to make the entire system ready for use. A first indicator of an overall functionality is, you guessed it, the indicator light on the dashboard. It is advisable to take a quick look at the operating instructions in order to interpret the light correctly. A defective (ABS) sensor can quickly lead to a total syste failure, which means your bike is no longer roadworthy (for the legislator) and the bike needs to go to the workshop. In order not to blindly rely on the lighting (or non-lighting) of this indicator light, you should regularly check the function of the ABS system at regular intervals – even a light bulb has a limited life span. Of course you should take care not to test the functionality of your ABS system  by braking on a public road intendendly.

Incidentally, a shorter braking distance is not the only argument for driving with the ABS anti-lock device. The increasing interest of drivers in more driving safety will inevitably have an impact on the (rest) value of a motorcycle and make such models all the more attractive for beginners or the large group of returners.